Let’s talk about matcha. The new craze that has swept over the internet for the past couple of months ( or years). What is Matcha? Matcha is made from the youngest green tea leaves which are then processed into a fine powder.

I for once, have been looking for matcha for at least a couple of years now. Living in Tirana makes it really hard to get your hands on new “exotic” ingredients, such as matcha but also lemongrass or even other Asian ingredients I am obsessed with. I like green tea and I was eager to try matcha. When I went to Shanghai in early 2014, I noticed that the “Matcha craze” was even stronger in China. So, I finally had the chance to try all things matcha. For some reason, it wasn’t an immediate hit with me and I kind of forgot about it for a couple of months.

Last summer, when I returned from Singapore among other stuff, I took with me some matcha powder and have been experimenting all sorts of stuff. Except of the easy Matcha Latte, I have been trying to make matcha mochi cakes, incorporating it in smoothies, and even for these amazing bliss balls. When I came across a recipe on Thrive Market for a Raw Matcha Ice Cream cake, I knew I definitely had to try it. It become more obvious that this was meant to be when I finally found some local raspberries, which were perfect for decorating this cake. And I must say, as my first attempt in making a raw cake it turned out pretty great. I am looking forward to making more raw cakes, considering summer is around the corner ( or it should be, after all the rain has stopped here). 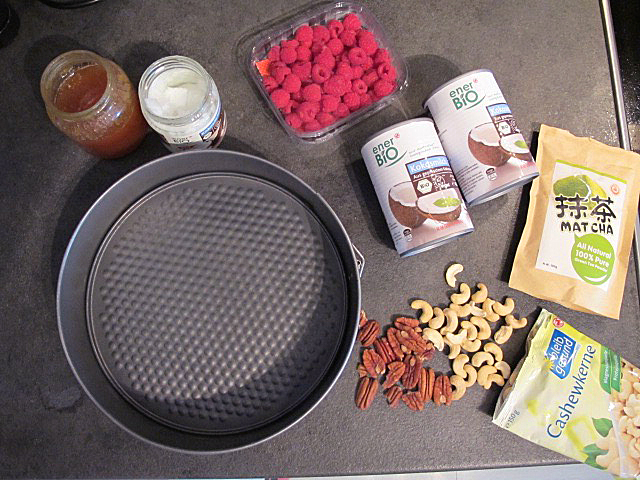 Coconut milk it’s a favourite ingredient that I like to work with. But it comes with its own “complications”. Even though I usually like to make my coconut milk from scratch, sometimes it’s just easier to buy a couple of cans, and now that I have found organic coconut milk in Tirana (@Rossman), I have become even the more lazier to make it on my own. However, not every can of coconut milk is ever the same, unfortunately. Some are more watery, some are more creamy, and I recently discovered that some can even be more like coconut oil than coconut milk ( still good though). As there is not trick really to find the perfect coconut milk for this recipe, it would usually help to buy a couple of extras. You can never have enough coconut milk at hand, but if you ever do here’s how we can fix it: make some matcha latte, these gorgeous raspberry scones, they go so well in smoothies, even on Piña Colada smoothie bowl, and of course coconut chia pudding.

I was inspired from the post on Thrive Market about vegan desserts, and have made very few alterations to the original recipe.

First things first, the coconut milk cans should be refrigerated, at least overnight. Then we start with the ingredients for the crust, and pulse them all together in a food processor, until they form a uniform paste like texture. Using your fingers, even out the crust mixture on a 10″ springform cake tin and put it in the freezer. Meanwhile, scoop the top of the coconut milk can into a bowl ( it would help if the bowl and whisk attachment would stay in the freezer for a couple of minutes). Start whipping the coconut cream for a few seconds, adding the rest of the ingredients. Keep mixing and whipping for a few more seconds until everything is well incorporated. Take out the cake tin with the crust and pour over the filling mixture. Return to freezer for a couple of hours. It might depend on your fridge how long it needs to set, as mine was frozen ready just 2-3 hours later. Raspberries make a really pretty decoration for the cake as the green from matcha matches well with their red, but decoration is always up to imagination 🙂 I added some white chocolate drizzles after the first few pieces were gone, as white chocolate and matcha really are a good combo.