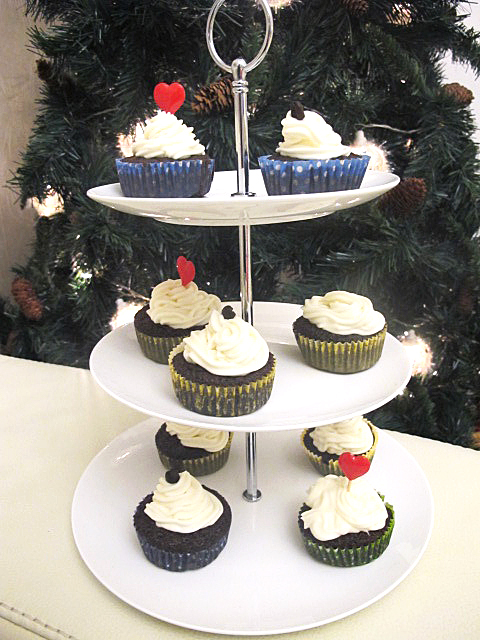 For me, winter holidays start when Starbucks launch their annual holiday beverages, especially my favourite, Toffee Nut Latte. I love the combo and would continue drinking it until the stores would run out of the syrup. Now that I live in a country where unfortunately there are no Starbucks in the vicinity, I was able to get a bottle of the Toffee Nut syrup, which I used anytime I drank coffee here, to bring me some holiday spirit. I used to bring it to work, and when I shared with one of my colleagues he said: “This thing is so amazing, it could even make dirt taste delicious”.

Even a few days ago, while I was travelling in Switzerland, I was thankful that they still had the Toffee Nut Latte, so I could binge drink it. Which I certainly did for the days I was there.

I created this recipe for Toffee Nut Latte cupcakes when it was a close friend’s birthday, I wanted to surprise her with some homemade cupcakes. She loves coffee, so I knew they should definitely include some coffee. But considering I am not a good baker (still) I accidentally added too much baking soda in the mixture and no matter how good they were in the beginning, the aftertaste of the baking soda was just unbearable. It was the first time that even my mom didn’t say the nicest words about the cupcakes (and she basically has never said a bad thing about my cooking. Moms are amazing like that <3). There was not time to make another batch, so I thought that if I made a really, really nice frosting cream on top maybe the cupcakes itself would’t taste that bad. I started mixing some mascarpone and cream that I had on hand, when I notice on the top shelf, my saviour, the Toffee Nut syrup. A few spoonfuls of that int he mascarpone cream and everyone forgot about the extra baking soda in the cupcakes ( well, almost everyone). The cupcakes were miraculously saved by Toffee Nut.

I made this recipe again for a bake sale at work and the Toffee Nut mascarpone cream was a hit. However, it might be difficult to get your hands on the Toffee Nut syrup ( I got mine from Starbucks in London, and in Greece for example they didn’t have it). In that case, I might suggest to use some other kind of syrup like hazelnut or caramel, or maybe both would come closer to the toffee nut flavour.